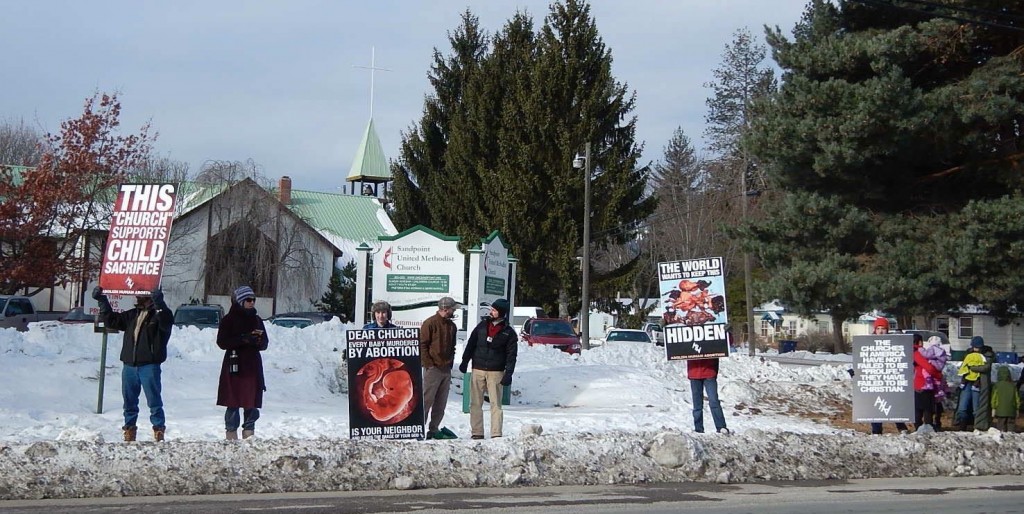 While about 48% of Americans describe themselves generally as “pro-life”, over 60% of Americans actually support legal abortion in the first trimester, and 80% support legal abortion in cases of rape and incest. In the great spiritual battle against child sacrifice, the battlefield is the hearts and minds of our neighbors. The battlefield exists wherever our neighbors are, not just at the killing centers themselves, the so called abortion “clinics”.

There are scientific reasons for opposing abortion, but there is only one source that is black and white, no shades of gray, from which humans can discern that it is ALWAYS wrong to murder a pre-born human being. That source is the Word of God, the Sword of the Spirit, the Bible, which declares itself as the offensive weapon in the spiritual warfare of every Christian (Ephesians 6:17).

The bible is also “powerful, and sharper than any twoedged sword, piercing even to the dividing asunder of soul and spirit, and of the joints and marrow, and is a discerner of the thoughts and intents of the heart” (Heb 4:12).  “The law of the Lord is perfect, converting the soul” (Proverbs 19:7).

There is only one people group on earth that has belief in the bible and that can hope to wield it in spiritual warfare effectively, and those people are born-again Christians. Since they are the only equipped warriors against principalities, against powers, against the rulers of darkness of this world, and against spiritual wickedness in high places, then it is right to ACTIVATE these warriors against the great evil that is human abortion.

That is what Church Repent is all about. There are essentially three major kinds of born again assemblies of believers – 1) those who are actively engaged in being salt and light and are engaged in loving their neighbor and combating the sin of child sacrifice 2) those who hold the correct opinion that the preborn are made in the image of God, and no person may murder them (Gen 9:6), yet take no action to deliver the pre-born from death and 3) God forbid, those who claim the name of Jesus Christ and actually support the wicked practice of child sacrifice.

Church Repent is designed for the latter 2 groups. Those that hold the right opinion but do nothing, we provoke to love and good works (Heb 10:24), and those who support child sacrifice, like the United Methodist Church at large and that of Sandpoint, Idaho we preach the word, being instant in season, out of season; “reprove, rebuke, exhort with all longsuffering and doctrine” (2 Tim 4:2). We “rebuke them sharply, that they may be sound in the faith” (Titus 1:13). We command them to repent, in the manner of the Apostle Paul in Acts 17, and we declare the judgment of God (Acts 17:30-31).

The manner in which we conduct ourselves is to first approach an assembly privately (we believe this follows the spirit of Matt 18:15-17), typically through the elders, discerning their position and activity in relation to abortion, verifying what their position actually is in relation to abortion. This can be with phone calls, letters, emails or meetings. We did this with the United Methodist Church over a period of several months through emails with their pastor, Stan Norman, in which he declared he supports the United Methodist position as declared in the Book of Discipline, page 112. Specifically, he stated “I believe the church’s position is appropriate at this point in time”. The Book of Discipline leaves open a wide door for the practice of abortion, and we were able to further determine from the website at umc.org that the church has resolutions (see http://archives.umc.org/interior.asp?ptid=4&mid=9239) in support of their participation in the Religious Coalition for Reproductive Choice, a vehemently pro-abort “religious” organization, of which the UMC is a founding member (rcrc.org).

While pastor Stan denied any knowledge of the RCRC, he said “I am not interested in a debate, but a discussion. If there is some flexibility in your position and sound theology to back up your feelings, then we could meet for coffee”. In our subsequent emails, we (meaning two men of our abolitionist society) challenged Pastor Stan on the church position by specifically quoting Matthew 28:20, and Psalm 139 and invited him to meet. He declined our invitation.

This past Sunday, we went to the street to declare to the rest of the local church the position of the UMC Sandpoint, which is a position in support of sin. Our initial assumption was that though the church leadership and organization supported legal abortion, the members would have not known that, and my expectation was that we would find church members who differed with the UMC position on abortion.

Sadly, that was not really the case. In fact, most of those attendees that we engaged were in full support of a woman’s so called “right to choose” the murder of her pre-born baby. After urging them to repent, we will let them be as “a heathen man and a publican” (Matt 18:17).

Here is a video documenting some of our engagement with UMC Sandpoint.