WE ARE ALL GUILTY!

We know this because we are part of the Bride of Christ and members of the evangelical church in America. However, we are the part of the church which has not only come to grips with the horrendous reality of abortion (most evangelical churches would say they have) but we have also awakened to the monstrous evil that is our own apathy regarding the shedding of innocent blood taking place all around us. The churches in America have minimized the wickedness of abortion and minimized their own role and responsibility to be salt and light in this culture of death.

We have all become too comfortable in this culture of death. Oh Lord, please stir up your people. Change our hearts Oh God and help us to see this abomination rightly. Give us strength to act accordingly. We confess that we have not been cold towards the shedding of innocent blood… but we understand how we have not been hot about it.

We confess our sin oh Lord and ask for your forgiveness and help.

God will not bless a nation or church that tolerates child sacrifice. Look around at this country: we are not going to be judged for abortion. Abortion is part of the judgment that has already come.

We are sounding the alarm and attempting to wake up the rest of our body to a grave sin which they have come to practice – apathy! We are also determined to put on display before the watching world which churches are and are not going to stand up against the greatest injustice against God ever carried out by fallen man. Future historians will look back on this period of history and note which churches did and did not cry aloud for the aborted unborn; which “churches” supported child sacrifice; which churches did and did not do more than just vote; which churches embraced the call for abolition and led the way in bringing abortion to its speedy end.

Rise Up! Oh Church of God and do the works you did at first

We are just seeking to be obedient to God and follow the leading of his Spirit as we leave the results of our work to His sovereign control. We are relying on the power of His Gospel, trusting in the Providence of His Spirit, and looking to the revelation of his divine will as our guide.

Why we are exhorting good pro-life churches

For 40 years now, evangelical churches have farmed out their practice of pure and undefiled religion to the state and various non-profit organizations who pridefully care for orphans, widows, and the oppressed in the absence of the Church (James 1:27). They have turned over their responsibility to “expose evils” and “be salt and light” to various pro-life para-church ministries who want to be the heroes out fighting on the front lines in their place, but with their support (Ephesians 5:11). They have placed the sole responsibility for removing evils and correcting oppression in the hands of politicians who have failed to be a minister of good on behalf of the innocent (Romans 13:4).

Pro-life churches have preferred to write checks and cast votes

Often times pro-life churches are choosing to write checks to Crisis Pregnancy Centers and pro-life lobbyists alone who put all of their time and energy into trying to encourage women to make the good choice in a pro-choice-abortion rights world… through counseling and or legislative acts which require them to make up their minds before a baby can feel pain (at twenty weeks!) or looking at an ultrasound before they choose to have their baby killed. Churches put their money towards pro-choice initiatives designed to encourage a good choice or “choosing life” but they do not support out and out abolition (not that there have yet been a lot of abolitionists to support) and have not chosen to support people who are against the choice being permissible or thinkable in the first place.

They have loved in word but not in deed

Evangelicals have largely adopted the pro-life movement’s embrace of pragmatic tactics and a pluralistic mindset. Evangelicals have followed the church of Rome and let them lead the way in fighting abortion and gaining the cultural reputation for standing against abortion. Evangelicals have chosen to fund organizations and esteem individuals who purposefully leave the Gospel of Jesus Christ out of their “Social Justice” programs and would even forsake the Gospel in their attempt to “save the babies” at all costs.

Even the best pro-life churches in America have  done some of the following things:

It is time for the churches in America to embrace an ideology of Abolition and refuse to go with the multitude to do evil. It is time we wake up and lead the charge to do justice, love kindness, and walk humbly with our God (Micah 6:8). It is time that we abandon all friendship with the world and cast off all arrangements which require us to be at peace with child sacrifice. It is time we choose to shine out as lights in the midst of this perverse generation.

We must begin to think rightly about abortion: Abortion is sin

We must bring our theology to bear in how we understand and attack the ideas which undergird the continued cultural approval and commendation of child sacrifice. 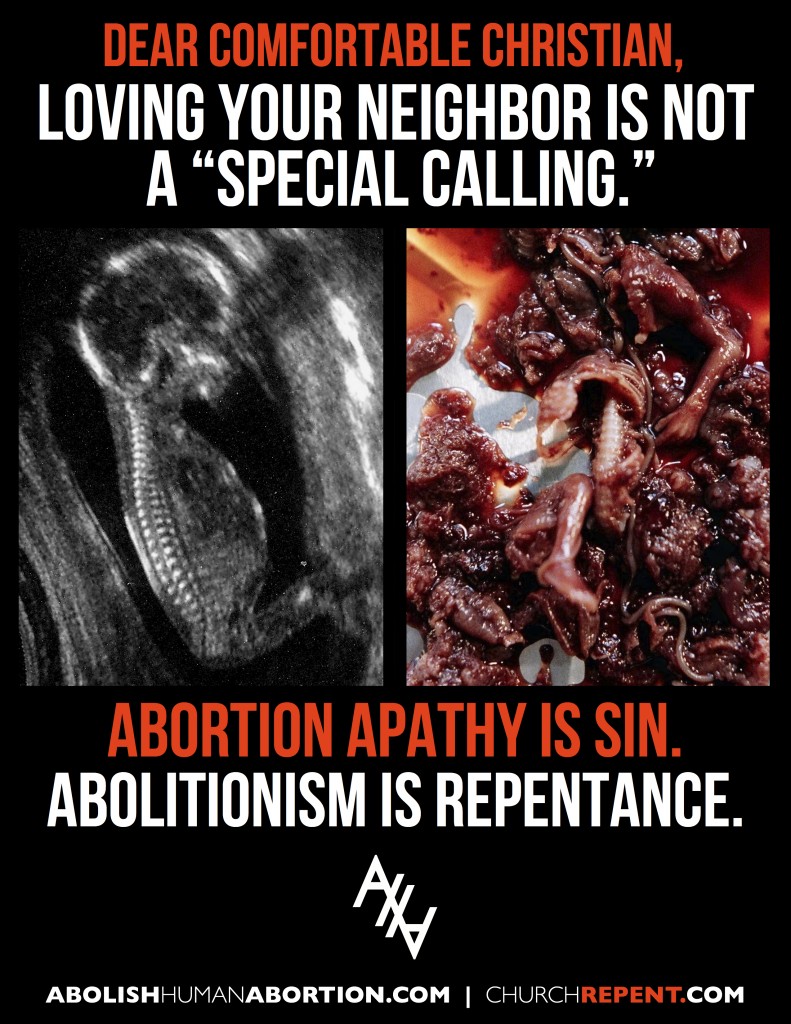 The things that we do are based upon the following principles:

We Love the Church

Our Love for the Church compels us to go to her and entreat her to fully embrace a biblically consistent ideology of Abolition and then immediately put it into practice. Our heart is set on exhorting local churches to incorporate abolitionism into their practice of pure and undefiled religion. We worship in a culture that kills its children. We can do no less.

We love the church so much that we hasten to call her and her shepherds to heed well the words of the prophet Ezekiel:

Then the word of the LORD came to me saying, “Son of man, prophesy against the shepherds of Israel. Prophesy and say to those shepherds, ‘Thus says the Lord GOD, “Woe, shepherds of Israel who have been feeding themselves! Should not the shepherds feed the flock? “You eat the fat and clothe yourselves with the wool, you slaughter the fat sheep without feeding the flock. “Those who are sickly you have not strengthened, the diseased you have not healed, the broken you have not bound up, the scattered you have not brought back, nor have you sought for the lost; but with force and with severity you have dominated them. “They were scattered for lack of a shepherd, and they became food for every beast of the field and were scattered. “My flock wandered through all the mountains and on every high hill; My flock was scattered over all the surface of the earth, and there was no one to search or seek for them.” Therefore, you shepherds, hear the word of the LORD: “As I live,” declares the Lord GOD, “surely because My flock has become a prey, My flock has even become food for all the beasts of the field for lack of a shepherd, and My shepherds did not search for My flock, but rather the shepherds fed themselves and did not feed My flock; therefore, you shepherds, hear the word of the LORD: ‘Thus says the Lord GOD, “Behold, I am against the shepherds, and I will demand My sheep from them and make them cease from feeding sheep. So the shepherds will not feed themselves anymore, but I will deliver My flock from their mouth, so that they will not be food for them”’” (Ezekiel 34:1-10).

Please understand that we are not demanding that churches stop being churches and become abolitionist societies, but rather that they rightly understand what it means to love their neighbor in a culture that practices child-sacrifice and integrate the work of abolition into their active practice of pure and undefiled religion. We are not saying that every Christian has to become a full-time abolitionist or become as active in the work of abolition as those running this website. We are simply encouraging Christians to see that they have not been loving their neighbors as they would love themselves or visiting abandoned women and fatherless children in their affliction as they are commanded or keeping themselves unstained by the world to the point that they do more than simply abstain from evils or take an opposing position regarding them. We long to see churches rise up, expose the evil of abortion everywhere, and help all those caught up in the temptations of this culture of death. We are calling on the Church of Jesus Christ and Christians everywhere to assail the darkness of abortion with the light of Christ and carry out actions against abortion to the extent that they are commanded in Scripture and to the extent that abolitionist societies lose their raison d’être.

What does it mean to repent?

Repentance means to turn from one course of action to the opposite; to change thinking or plans. It doesn’t necessarily include the idea of turning from evil to good, although that is usually the case.  If you repented of going to the store, you would stop going to the store and go somewhere else. The Bible includes numerous examples of individuals and groups repenting and shows us what that meant.

Repentance is not sorrow.  One can feel sorry for their actions, but not repent (worldly sorrow); or one can have Godly sorrow that leads to repentance, but repentance and sorrow are not the same thing.  Sorrow is a feeling.  Repentance is an action.

For the sorrow that is according to the will of God produces a repentance without regret, leading to salvation, but the sorrow of the world produces death. –II Corinthians 7:10

The Church broadly and Christians individually are guilty of apathy and complacency toward the child sacrifice in their midst.  It is not that the church has failed to believe that abortion is wrong (although some Christians are guilty of this) … it is that the Church has failed to prioritize and take action against the common, accepted, daily murder of the weak, defenseless, and innocent neighbors around them.

The church cannot claim that the murder of innocent children is merely “a political issue”. It is your defenseless neighbor being torn to pieces. Individual churches cannot claim that the murder of innocent children is “not their ministry” – you are walking by the bloodied, beaten traveler in the ditch on your way to “more important things”.  The church cannot hide behind the defeatist, pragmatic retort that “there is nothing we can really do to stop it”, and rather be obedient to God. Cry out for the weak, preach repentance to the lost, and stand boldly for the truth without regard for the outcome.  Obedience is ours; the results are God’s.

Then the people of Nineveh believed in God; and they called a fast and put on sackcloth from the greatest to the least of them. When the word reached the king of Nineveh, he arose from his throne, laid aside his robe from him, covered himself with sackcloth and sat on the ashes. He issued a proclamation and it said, “In Nineveh by the decree of the king and his nobles: Do not let man, beast, herd, or flock taste a thing. Do not let them eat or drink water. “But both man and beast must be covered with sackcloth; and let men call on God earnestly that each may turn from his wicked way and from the violence which is in his hands.  –Jonah 3:5-8

This repentance is the opposite of apathy and complacency. See here for more ideas.