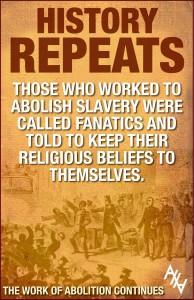 Abolitionists embrace a certain bold posture in the face of evil and utterly reject the widely accepted, largely ignored, or complacently permitted injustices that most people choose to ignore. Abolitionists make a point of bringing darkness out into the light of day, or rather, of shining light in the darkness that is already there.

In the late eighteenth and nineteenth centuries, Abolitionists like ourselves brought the evil of the British slave trade (man-stealing) and American chattel slavery (dehumanizing a person to the level of a beast) into conflict with the practice of true Christianity. Today we are seeking to bring the practice of human abortion (modern day child sacrifice) into full blown conflict with true Christianity. The first abolitionists were told to keep their moral and religious beliefs to themselves and rejected as impractical fools, zealots, and incendiary fanatics.

We hear the same thing today, ….but we believe that not to speak out against abortion when it is clearly believed to be an evil, is itself evil. And not to act against it, is to act for it.

We desire to shine as lights in this present darkness and make ourselves seen and heard in this apathetic culture of child-killing-tolerance and abortion-as-birth-control complacency. We are against the world, for the world; and though we live in the world, we do not orient our lives around its principles. We are not concerned with fitting in and remaining friends with those who think pre-born children are expendable and that we are not allowed to cry aloud for our neighbors who are being taken away to be slaughtered on an altar of convenience. We could not care less about being labeled fanatics and fundamentalists by those who think that scraping a baby into pieces is the key to female liberation or those who agree with us and call themselves “prolifers” yet remain far more interested in football and keeping up with reality television.

Most people, even good “pro-life” Christian people, are far too sensitive and socially insecure to speak their mind about such a controversial “issue” except when they are safe within the confines of their church, family, or circle of pro-life friends. People who are more concerned with personal peace and affluence need not call themselves abolitionists. Indeed, those who will not discuss abortion in the public square are not just failing to be abolitionists, they are failing to be Christians who “shine as lights in the midst of this crooked and twisted generation” (Philippians 2:15)

We believe that abortion is an abomination in the eyes of God and an injustice to the rights of man as made in His image. Toleration of abortion is utterly inconsistent with the revealed will of God.

Abolitionism is the Christian response to entrenched evils

What drives abolitionism is a desire to do justice, love mercy, and walk humbly with our God (Micah 6:8). We seek to correct oppression, bring justice to the fatherless and help to the helpless (Isaiah 1:16-17). Our desire is to consistently practice what the New Testament calls pure and undefiled religion: to look after the orphaned and widows in their affliction, and to keep ourselves unstained by the world (James 1:27). We long to rightly “hate evil, love good, and establish justice in the gate” (Amos 5:15).

We are simply attempting to answer the question: What does Christianity look like in a culture that kills its children? And then put our answer into action.

We are simply seeking to keep the command to “love your neighbor as yourself” (Matthew 19:19).

God is a rescuer, a deliverer. And we are his disciples. Of course we are to follow him in this work.

The goal of all abolitionist movements is the redemption of man from the dominion of man.

As members of the Body and Bride of Christ

The abolitionist movement is a work of the church. We are the part of the body that is awake to this evil and seeking to rouse the rest of our members to action. We seek to awaken the indifferent, arrest the apathetic, and rouse the regenerate to join in the fight against abortion. We aim to undermine prevalent streams of misinformation propped up by abortion defenders in our culture designed to justify abortion or  encourage the toleration of its occurrence.

Abolition is driven by the Gospel

This is a gospel driven movement. The Gospel alone possesses the power and promise to transform the lives of those travailing in sin and the desperations and addictions which lead to abortion. The Gospel alone possesses the power to redeem the rightfully damned, restore the disregarded, reform the reckless, lift up the despairing, and rescue this sinful culture from its deathly addiction to sin and self that has grown out of our rebellion to God.

Abolitionism is not a front for the Gospel. It is an outflowing from the Gospel; one of the ways that the Gospel transforms a culture that kills its unborn children.

The Gospel is not simply, “Jesus died for your sins, believe in Him and now your saved.” The Gospel is God’s story of the redemption of man from the dominion of death as a result of the life, death, and resurrection of the Son of God. Christ came not only to die that you might have a personal relationship with Him but also to redeem a fallen world and hopeless people who were destined for death and slaves to sins and debtors of a justified death which Jesus Christ risen from the grave abolished once and for all in order that men might not perish but have everlasting life in relationship with God the Father, Son, and Holy Ghost. The proclamation of the Gospel is proceeded by the declaration that humanity is bent beyond self-repair and in need of a savior. Before the Good news is embraced we must talk about the bad news and define what is and what is not rebellion to God and what he demands of those whom he calls to repent.

The great evil of human abortion must be abolished, not only prohibited by law. Abolitionists aim to transform this wicked culture and society, by the grace of God, with the Gospel of Jesus the Messiah and His holy law. His law informs us that murder is evil. To all those who repent of the wickedness of their heart, thoughts, and actions, and who put their trust solely in Jesus, the Gospel of Jesus offers forgiveness, eternal life, and freedom from sin. The Lord Jesus, who chose to leave the glory of Heaven, who came to Earth as an embryo, who grew up clothed in human flesh, who taught truth, love, and grace, who died on the cross at the hands of evil men who desired to preserve their own power, and who rose victoriously from the dead on the third day as He had predicted, is the focus of the abolitionist’s life and work. It is out of love for Him that we also love our neighbor as ourselves, as He commanded.

We are committed to an unfettered, untainted, uncompromising adherence to the Good news that Jesus Christ is Lord of heaven and earth and stepped down into space-time-history to redeem a lost, wandering, and wicked people from sin, certain death, and eternal separation from God. We are abolitionists because we have been adopted by God. Our work is biblically mandated and sovereignly ordained. We are called to be salt and light in a sin-dar 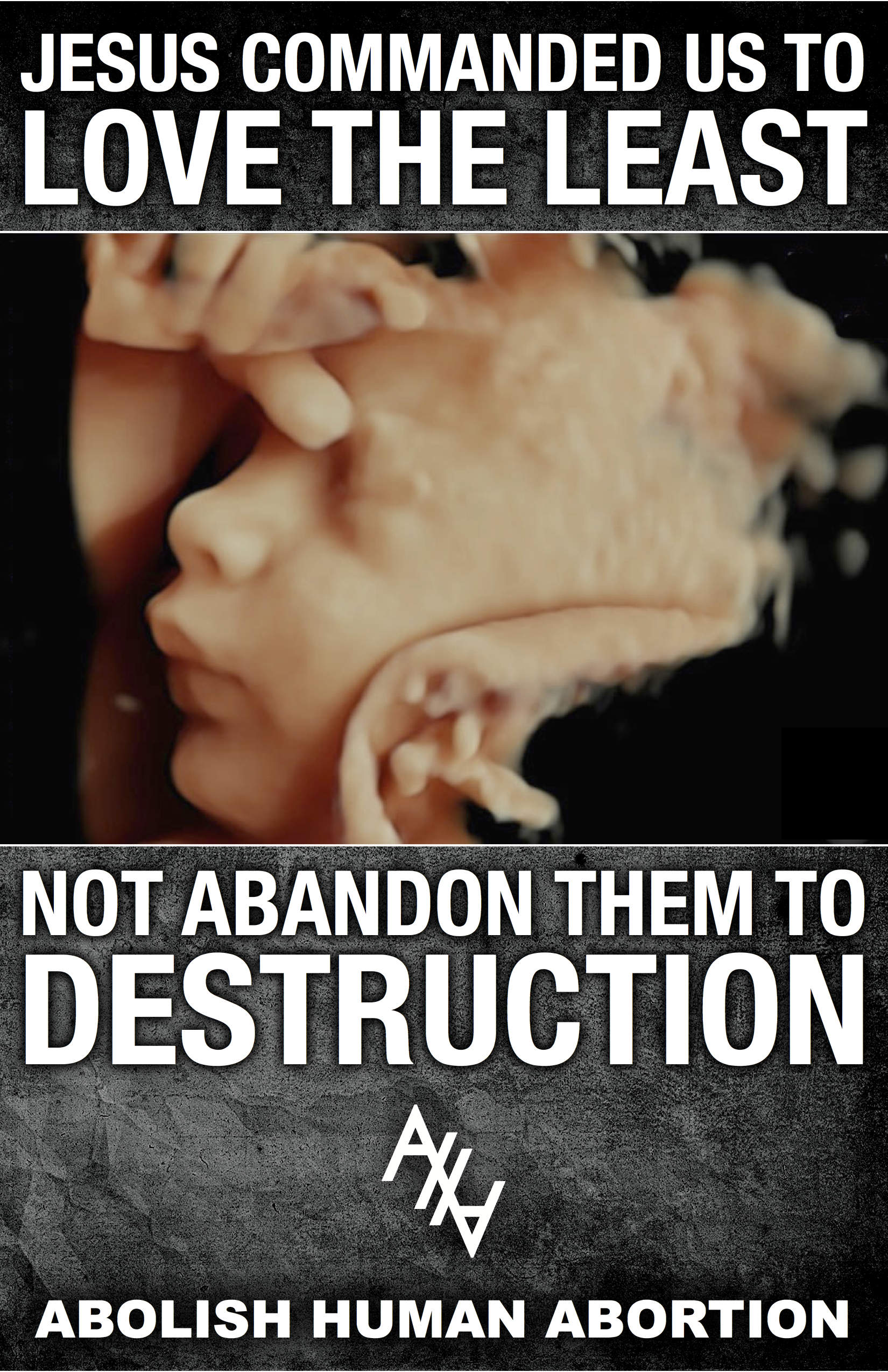 kened, and death-addicted world; we are commanded to care for the fatherless and bring justice to the oppressed and preyed-upon. We have been exhorted to expose deeds of darkness, and destroy all speculations raised up against the knowledge of God. We are exhorted to rescue the weak from death, snatch the falling from flames, and hold back the stumbling from the slaughter.

Supreme above all philosophies, all isms and ideologies, is the fullness of the Gospel of God; (that God himself stepped down into human history as Jesus Christ, conceived in the womb of a young unmarried woman who did not choose to be with child or plan on being a mother, to live a sinless life before wicked man whom he came to die for, and redeem from the just wrath of God against sinners. It is the will of God that all men might come to know Him, and in the fullness of time, Christ Jesus has made this possible). The Gospel above all else possesses the capacity to mobilize human action, motivate moral behavior, and mandate consistent compassionate social justice. It is the answer to all of societies ills and injustices. It is the bulwark against an ever increasing inhumanity of man against man. It is the Gospel alone that will end human oppression and redeem mankind from the dominion of evil powers and sinful man. It is the wellspring of love, hope, and joy. The actual foundation for justice. And the real answer to abortion.

Abortion is not a peripheral issue

The evil of abortion will be overcome by the people of God empowered by His Spirit to conquer deeds of darkness “by the blood of the Lamb, and the Word of their testimony, for they love not their lives even unto death.” (Rev. 12:11) Just as Christians in 19th century America would have been hypocritical and callous to hold an anti-slavery position yet do nothing to end the practice, we believe that all Christians are called to the non-violent task of working to end abortion rather than merely believing that abortion is wrong. “…Faith, if it hath not works, is dead” (James 2:17).

If we love our preborn neighbors as we love ourselves, we will not rest until abortion is abolished. We will not cease to agitate our culture and assist our neighbors until the blood of the most helpless and innocent members of our society ceases to flow as a river through this land.

Abolition is carried out by provoking a clash between the ways of God and the ways of man.

Abolitionists throughout history have not been driven by a secular impulse for social justice. We have always understood ourselves to be called by God to live as “Holy Warriors” raised up against the greatest evils of our age. We have embraced the word of God and the Gospel of Jesus Christ as our sure foundation.  We seek to be obedient to the great Abolitionist of death who broke our bonds to sin, set us free, and gave us new life in Him and commissioned us to bring his Gospel into all the world subduing all pain, darkness, death, until He comes again.

Duty is ours, the results are God’s. We do not place our trust in “chariots or warhorses” the pragmatic schemes and political “wisdom” of men. We do not put our trust in numbers or  the purported power of pluralistic appeals. We scorn the incrementalist approaches preferred by faithless men. Our allegiance is to Christ alone and we stand upon His word alone. By faith we are overcoming the world as He is destroying every work of the devil. 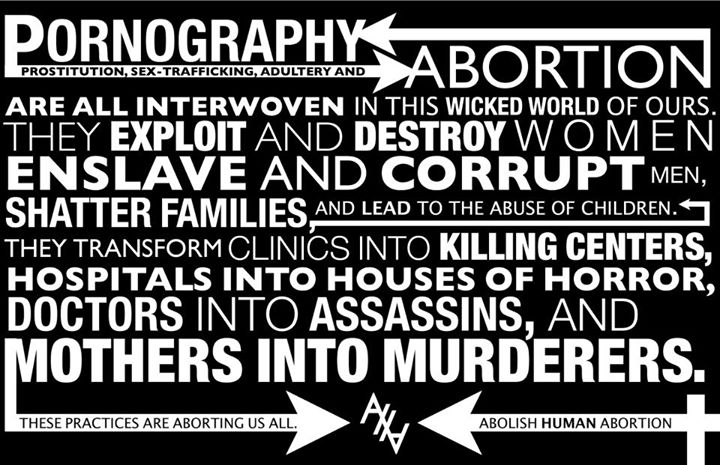